I’m not sure how to explain this without making my mother sound like a crazy person, so I hope I tell this story in a way she would approve. She was always my best editor; an art history professor by day, she was also an effective, eloquent writer, widely published, an architectural historian, and respected researcher. She was my best teacher.

I miss her. She died in May of 2013 when breast cancer became more than her body could fight.

I think she would really love what I’m doing here; not just the fibre art creations but the process and how I’m combining my skills and interests in literature, horticulture, writing, photography, and fibre to make it happen. Her influence is everywhere – art and art history, her eye for perspective, her books, her prints, her pigs…

This isn’t a story about a collection of pigs or a hidden closet of pig paraphernalia, it’s really a story about just one pig and a few others. It began one Christmas when I was old enough to know that Santa was really my mom; that year my father gave my mother some money and said, “go buy yourself a sweater.” as her Christmas gift. (Which makes him sound sort of terrible, but to all of our surprise every year he came out of nowhere with some extravagant gift for her –

usually a hard to get editon of some art book she really wanted. He did the same every birthday and mother’s day too.) That year she took the sweater money and came home with this pig.

I’m not sure where she got it, and it has no inscription but she was thrilled with her pig and my father was completely confused. I don’t believe he was truly mad, but he was certainly unimpressed. A sweater was a practical gift and he saw no practical use for this pig. I don’t think he ever really understood that her pleasure came not just from the pig, but his reaction to the pig. When she knew she was dying she brought my sister and I together to divide her belongings. The process went smoother than in a lot of families I know, I think because my sister and I are such completely opposite people that we were drawn to completely different things. This pig was one of the first things my mother gave me.

Also in her funny collection of folk art were some quirky flying creatures – a frog and a cow  who hung in her kitchen for many years. (I’ll come back to cows soon – with a felting project, my mother, and Joe Fafard.) A flying pig would seem like an appropriate fit, but she didn’t have one of those. I know that my felted flying pigs would make her smile.

I suppose, for me, the flying pig represents an impossibility (an adorable impossibility). Everything about my life feels like an impossibility now, but I’m still living it; I just can’t believe I breathe without my son. It’s sad living without my mother, but losing your parents is meant to be an inevitability in life; it’s supposed to happen in that order. Life without Finn is blanketed in a different kind of grief. Something feels wrong every minute of every day, something is missing – that panic feeling you feel when you wonder where your child is, a little pit in my gut that never goes away. I can wish that my parents were here to meet Oliver and to admire Hannah, and imagine it happily, but when I wish and imagine Finn here it hurts and I see ghosts in places he should be.

When I was first learning to felt a flying pig was one of the first things I thought of, though I didn’t actually create one until last year. My first self written crochet amigurumi pattern however was a flying pig (someday I’ll translate that to a readable pattern, but for now even I don’t understand what I wrote). I do believe a part of my imagination lives in an impossible place now – thankfully it comes out in the form of ridiculously cute felted sculptures and tiny crocheted creatures.

As I write the instructions for the flying pig needle felting kits I was joined by a few more of my mother’s pigs. Well, these guys were my find and first love, which I brought home from Australia one summer to live with my mother. I sent her a text from Australia the day I found Joe with his photo and that lovey eyed emoji to which she responded the same. I can still hear her silly giggle in my memory. Joe and the teeny tiny pig were found at a garden centre in Wentworth Falls, NSW (a little west of Sydney in the mountains) and carried home with care. (Which, by the way, Australian garden centres aren’t much different than Canadian garden centres except the seasons are backward and perennials and annuals are all mixed up. It’s pretty fun actually – like being in Wonderland… or  uh, Oz..)  My late mother-in-law did not understand the attraction to the pigs, but I do recall the faintest glimmer of a smile when she looked at Joe. Pigs, who doesn’t love them? 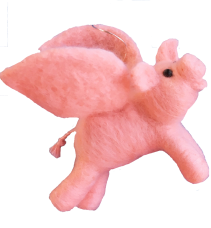 “The time has come,” the Walrus said,
“To talk of many things:
Of shoes-and ships-and sealing-wax-
Of cabbages-and kings-
And why the sea is boiling hot-
And whether pigs have wings.”
Through the Looking Glass
Lewis Carroll